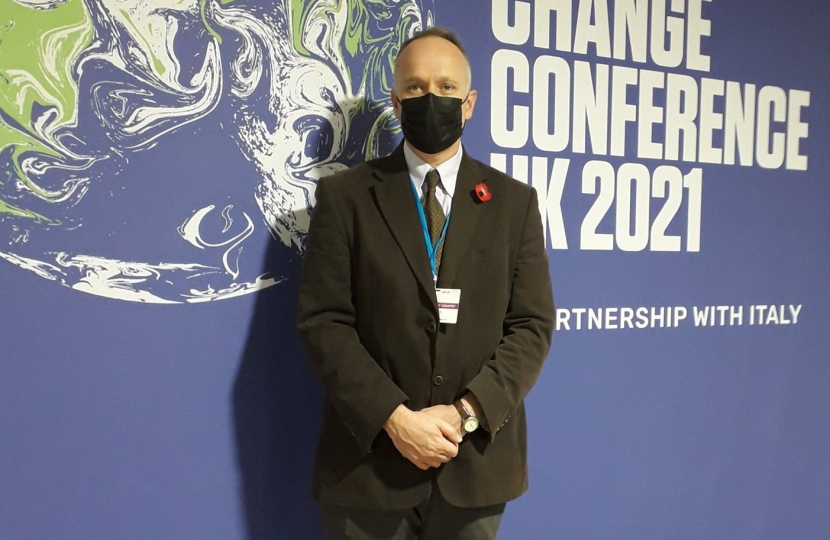 As the conference reached its half-way mark, significant pledges have already been made to try and keep the 1.5 degree limit on temperature rises within reach. More than 100 world leaders promised to tackle deforestation, aiming to end or reverse it by 2030. This pledge is vital as trees capture and absorb large amounts of CO2.

There was a commitment from more than 40 countries to shift away from coal, which is the single biggest contributor to climate change. Dr Hudson had previously shown his opposition to the proposed Cumbrian coal mine: https://www.neilhudson.org.uk/news/statement-dr-neil-hudson-mp-proposed-west-cumbria-coal-mine.

On ‘Nature’ day of the conference governments and businesses joined farmers and local communities to secure new agreements to protect nature and accelerate the shift to sustainable agriculture and land use practices by making them more attractive, accessible and affordable than unsustainable alternatives.  The UK also announced funding of £500m to support the implementation of the Forest, Agriculture and Commodity Trade (FACT) Roadmap that was launched during the World Leaders Summit earlier this week, in which 28 countries are working together to protect forests while promoting development and trade.

Examples of national commitments aligned with this agenda include:

Commenting on his attendance at COP26 Dr Hudson said:

“It was a privilege and honour to attend this hugely important international summit on climate change, as I know it is so important to my constituents and indeed all of humanity. Encouraging progress is being made at the Summit to keep the 1.5 alive. The UK is a world-leader in many areas, being the first country to legislate to eliminate our contribution to climate change by 2050. It was great to see nature and sustainable land use at the heart of the Summit. Food production and looking after the environment go hand in hand- it’s what our fantastic farmers in Cumbria and the UK do each and every day.”

“If we are to limit global warming and keep the goal of 1.5C alive, then the world needs to use land sustainably and put protection and restoration of nature at the heart of all we do.

The commitments being made today show that nature and land use is being recognised as essential to meeting the Paris Agreement goals, and will contribute to addressing the twin crises of climate change and biodiversity loss.

Meanwhile, as we look ahead to negotiations in week two of COP, I urge all parties to come to the table with the constructive compromises and ambitions needed.”