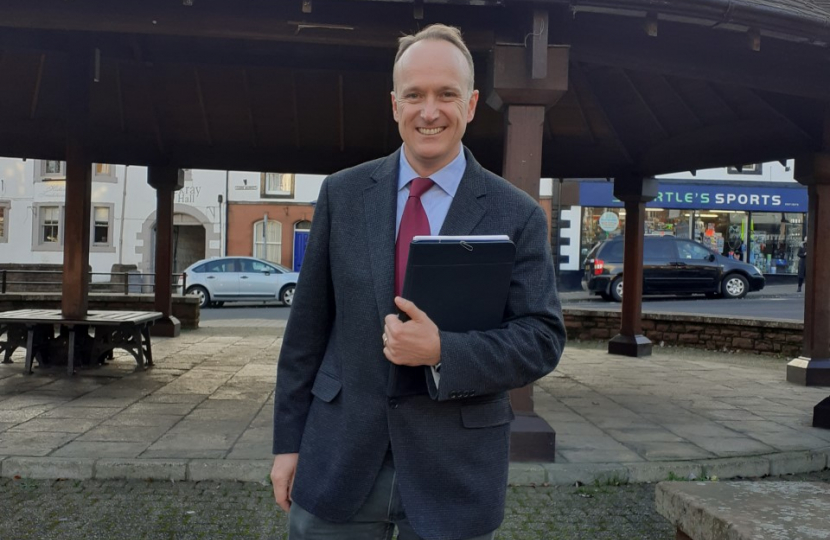 The harrowing scenes from Ukraine continue and the Russian aggression and destruction is impossible to comprehend. I have been greatly moved by the generosity and kindness across Penrith and The Border in supporting Ukrainian refugees, including offers of housing. It was humbling to attend the Vigil for Peace in Penrith last month organised by the Penrith and Eden Refugee Network. It is truly heart-warming to see community goodwill in such difficult and tragic times. I am pleased that this goodwill is being supported with the Humanitarian Sponsorship Scheme, including the right to work for Ukrainian refugees. I have been calling for this compassionate measure to be extended to all asylum seekers waiting more than six months for a decision on their asylum claim, joining 65 Conservative Parliamentarians in writing to the Prime Minister asking for the Government to do this. Similarly, I am part of a cross-party group of over 140 Parliamentarians calling on the Government to create a fast-track visa scheme for Ukrainian students and academics.

In March, the Chancellor delivered his Spring Statement. I welcome some of the measures to tackle the cost-of-living crisis, including the cut in fuel duty, but we need to do more for households facing hardship. Our rural communities and industries need further support. I was grateful for the opportunity to hear directly from our rural communities about their experiences of the cost-of-living crisis, at my second virtual farming roadshow. 45 farmers and rural stakeholders told me about the impact they faced from a combination of rising costs in oil, petrol, diesel, fertiliser and animal feed. Consequently, I raised the need for urgent action in the House of Commons, and wrote to the Secretary of State for Environment, Food and Rural Affairs, calling for Government to provide vital support.

Fertiliser inflation has also been a focus as a member of the Environment, Food and Rural Affairs Select Committee. Our Committee wrote to the DEFRA Secretary, calling for an urgent update on what steps he is taking to support farmers struggling with rising fertiliser costs and to mitigate its impact on food security. As a Conservative MP, my Committee presence is vital in ensuring the Government acts in the best interests of rural communities. By contrast, the Liberal Democrats are not represented on this Committee.

At a tourism and hospitality roundtable I hosted in Ullswater, I spoke directly with stakeholders about the impacts of the cost-of-living and the pandemic on this sector in Cumbria. I wrote to the Chancellor, the Secretary of State for Digital, Culture, Media and Sport, and the Home Secretary, calling for an extension in reduced rates of VAT, provision of Business Support Relief and action on workforce visas and housing.

During the pandemic, Government intervention was an essential lifeline for households and industries alike. I will continue to campaign for this vital support to shore up our communities during these challenging times.

I have also been representing Eden District Council area residents in Parliament, highlighting the Council leadership’s failure to provide fair green waste collection services. As I told the House of Commons, I remain opposed to local government restructuring in Cumbria. However, we are where we are, and we must make it work for local residents. Skelton village only has access to a once-a-month green waste skip collection, while Southwaite has no collection service at all. I thank the local Councillors for raising this issue

directly to the Council. Fair waste collection services should not be held back by party politics and local government restructuring inertia.

Also in Westminster, I voted for a legal requirement for water companies to significantly reduce their storm overflows. I am pleased that the Government is making progress on tackling this important issue through its Environment Act. A public consultation has also opened, allowing you to have your say on the Government’s proposals to tackle storm overflows in its Storm Overflow Discharge Reduction Plan. This includes a new monitoring and reporting framework to enforce action against water companies that neglect their legal duties. I hope this sends a clear signal to water companies that when this Government says that they must act to reduce harms from storm overflows, it means it. Sadly, the neighbouring Lib Dem MP has been pumping out deliberately alarmist and inaccurate information about sewage in my constituency. When people are crying out for honesty and integrity in politics it is sad to see political opponents sinking to this level. In fact, the Government is tackling the problem of sewage in rivers with tough, effective and affordable measures.

On a happier united political note, I warmly welcomed the cross-party unity shown across the Commons in support of the British Sign Language Bill. It was an honour to speak in support of this Bill in the Chamber. The Bill requires the Department for Work and Pensions to provide guidance to over 20 Departments on how they can better promote and facilitate the use of British Sign Language. I sincerely hope it breaks down barriers, provides equality of access for all of our deaf communities. Congratulations to Rosie Cooper, Labour MP for West Lancashire, for her success in taking this important Bill forward.

Standing up for the United Kingdom

As an MP at the border, I am passionate about our United Kingdom staying together. I will work with colleagues along the border and across the border to ensure that Scotland and England flourish in partnership.