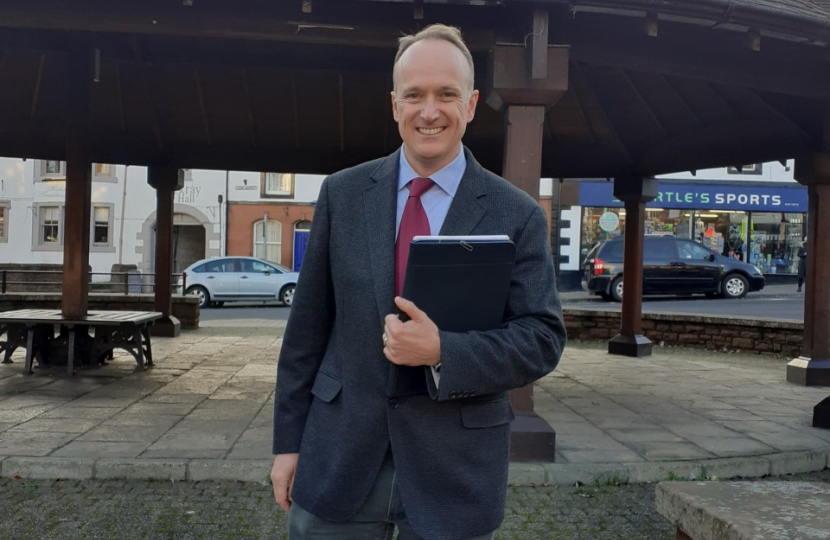 One of the hugest joys and privileges of being an MP is getting to engage with youngsters across the constituency. Indeed, since my last column I’ve formally opened Plumpton School’s refurbished playground, had a Q and A with their pupils and launched a social enterprise entrepreneur challenge with pupils from Asby and Morland.

Continually amazed by the thoughtfulness of their questions, this month was no exception, but almost all Q and A sessions with schools still come back at some point to one issue – ‘Partygate’. Having had to miss out on sharing their own birthdays with loved ones or not seeing family, our young folk were quite rightly clearly upset when news emerged that the Prime Minister and the Chancellor were issued with Fixed Penalty Notices for breaking Covid public health rules. Like these children, I was extremely disappointed they broke the laws that they themselves brought in to keep us all safe. I have said from the start that I would not defend the indefensible so, I made a statement asking for an orderly transition to a leadership election as soon as the international situation permits. With devastating scenes from Ukraine filling our TV screens daily, stability and continuity will be crucial in efforts to support those affected by the conflict and ultimately to bring the despicable Russian invasion to an end.

While Parliament was as tense as ever, I think it’s important not to overlook the pressing issues affecting people locally. As such, I stood up in the Commons and quizzed the Prime Minister on rural bus funding in our county – one of the most important local services which needs addressing. As many of you will be acutely aware, our public transport in Cumbria just isn’t good enough and so the news that Cumbria was not allocated any money during the latest tranche of funding came as a blow. Much more than just a transport issue, the lack of regular buses has an impact on young people attending the next stages of their education, people able to find suitable work and the mental health of those facing rural isolation. That’s why I was pleased to see the Prime Minister take my concerns seriously, and I can announce he has kindly facilitated a meeting between myself and the minister responsible for buses, Baroness Vere. I will keep going on this vital issue which is so important for us here in rural Cumbria

Another issue I hope the new council authority can make headway on is fairer garden waste collection. Invited by parish councillors and residents, I went to a meeting in Skelton of locals who are not provided with collected green bins even though they pay the same council tax rates as others in Eden. It’s unfair and residents in Skelton and other affected areas are rightly upset. We cannot let local government reorganisation get in the way of providing quality services.

Staying local, this month has seen me continue my campaign to protect the environment. On the EFRA Select Committee, I quizzed the prospective boss of water regulator OFWAT, Iain Coucher, on how we can better hold water companies to account for discharging unacceptable amounts of sewage into our waterways. Already proactive measures are being taken by this Government, with long-term plans to overhaul our sewage systems and

for the first time in history a Government has pledged to eliminate all damage to the environment from storm sewage discharges.

As key stakeholders in the environment, farmers play a pivotal role in protecting wildlife and habitats, but with spiralling costs it is becoming increasingly difficult for them to do so while also producing high-quality food. That is why I stood up in the Commons and asked the Government what they are doing to mitigate the industry’s increasing financial pressures. Since then, the announcement came that BPS payments are being brought forward to help farmers with their cashflows. The Government has shown it is listening to me and most importantly to our British farmers.

Of course, increasing prices are being felt in all walks of life, and successive meetings with different local groups highlighted the cost-of-living crisis as the biggest challenge facing people right now. I continue to urge the Government to take further action to tackle this and support households and businesses through this challenging time, as they did during the pandemic.

Other issues I’ve pressed the Government on include the proposal to privatise Channel 4 and the policy of processing asylum seekers in Rwanda. Firstly, I have major concerns with the Rwanda policy and do not think this policy is the right way forward for this issue and continue to make representations to Government on this. I firmly believe we have a moral duty as an outward-looking progressive country to help those vulnerable people who are fleeing persecution. The United Kingdom has a proud record of helping those fleeing violence, oppression or tyranny from around the world.

Secondly, I spoke out against the plans to privatise Channel 4 – particularly on the basis that we cannot make terrestrial television harder to watch at a time when parts of rural Cumbria struggle with internet connectivity. In our area and across the country we treasure our public service broadcasters like Channel 4, the BBC and ITV. We need to protect them not challenge them.