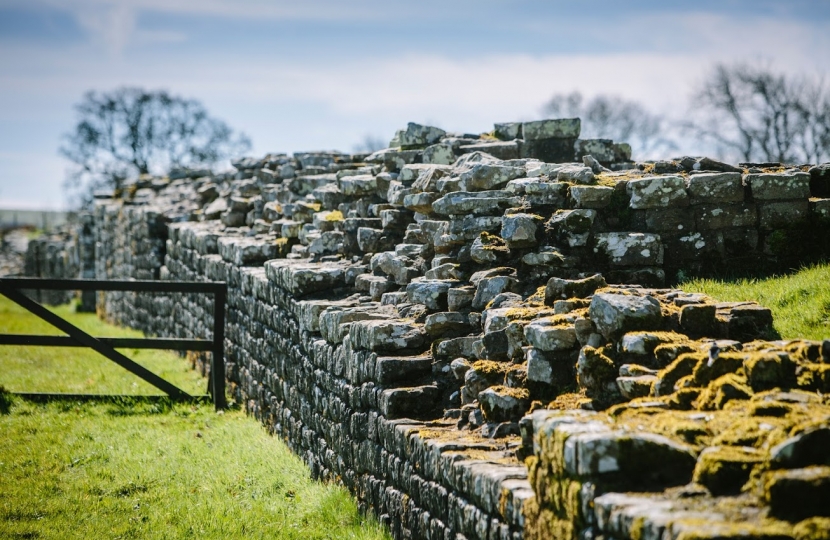 Newcastle University and Historic England’s Archaeological Projects team are co-directing the excavation, facilitated by English Heritage. The project is due to finish in 2026.

Visitors to the English Heritage site of Birdoswald are able to view ongoing excavation until 5th August by booking free guided tours.

One of the most significant sites on the Wall, Birdoswald has been at the centre of research into Hadrian’s Wall for well over a century, and in the last few decades work led by Historic England Senior Archaeologist Tony Wilmott inside the fort, and more recently at the fort cemetery, has attracted international attention.

Tony will be working with Newcastle University’s Professor Ian Haynes to lead the new programme of work to examine the extensive settlement associated with the fort, together with the area  immediately to the north of the Wall itself.

Together they are seeking to answer intruiging questions such as:

To tackle these questions the team will deploy the very latest in archaeological methods, spanning the use of extensive geophysical survey to see beneath the soil, advanced digital systems to record finds and features, and a wide spectrum of expertise in environmental science and geospatial analysis.  The project will simultaneously deliver high-tech training for the next generation of archaeologists, and over a hundred of Newcastle University’s current archaeology students will participate in the excavation.

Dr Neil Hudson, MP for Penrith and The Border said “‘It is great to see a new partnership formed between Historic England, Newcastle University and English Heritage for new excavations at the Birdoswald Roman Fort in Cumbria, on Hadrian’s Wall World Heritage Site. The project will examine the extensive settlement associated with the fort, together with the area  immediately to the north of the Wall itself.   We have many significant cultural and historical sites in Cumbria and I can’t think of a better site to deliver the best in class archaeological training to the next generation of archaeologists. I really look forward to seeing for myself how this exciting dig progresses. With Harrison Ford filming his next Indiana Jones movie in the north of England, this dig will hopefully inspire the next generation of famous archaeologists!”

Tony Wilmott, Historic England Senior Archaeologist and project co-director said “The project is a perfect opportunity to build upon Historic England’s extensive research at Birdoswald, and to better understand the relationship between the fort and the settlement outside the Wall, in terms of timescales and uses.  At the same time we’re offering vital training in field archaeology using the innovative techniques of digital recording that we have developed. We’re delighted by our fruitful partnership with long-time friends and colleagues at Newcastle University.”

Ian Haynes, Newcastle University Professor of Archaeology and project co-director said, ‘Birdoswald holds the key to many of the big questions about Hadrian’s Wall and the cosmopolitan communities who lived on it during and after the Roman period. This fantastic partnership provides the opportunity to develop the next generation of field archaeologists, with dedicated expert tuition “from the trowel’s edge”, and using the latest advances in bio-archaeology and advanced geospatial analysis’.

Lynn Rylance, Head of Historic Properties at English Heritage said: “We are pleased that Newcastle University and Historic England have chosen to use Birdoswald Roman Fort as a location to instruct the next generation of archaeologists.  Over the course of the summer, visitors to the fort will be able to come along and watch this fascinating excavation taking place and put any questions directly to the experts. We are looking forward to hosting the team here.”

Work at Birdoswald follows on another major research project led by the two directors, excavations at a famous Roman cult site at Maryport, supported by Senhouse Roman Trust in conjunction with Newcastle University.  The full report on the five years of excavations there was published recently