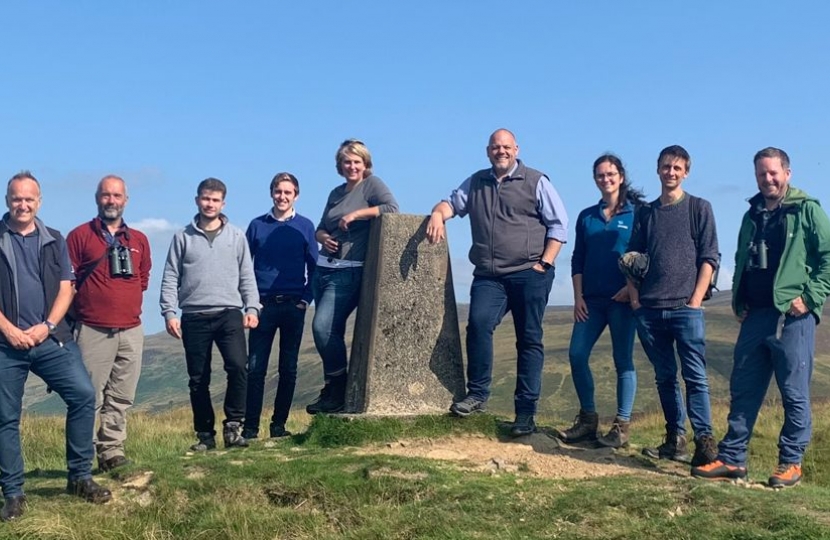 Dr Neil Hudson, MP for Penrith and The Border, led a delegation visit to the RSPB Geltsdale Nature Reserve with colleagues from the Conservative Environment Network Parliamentary Caucus yesterday (Thursday 2 September) to showcase the successful work being done locally to restore important habitats and wildlife.

The two hill farms at Geltsdale have restored large swathes of degraded peatland and ushered in the return of wildlife which thrive on healthy upland habitat, like Curlew and Lapwing birds.

Healthy peat bogs also help to tackle climate change by capturing and storing carbon from the atmosphere. And they act like sponges for water too, reducing runoff into rivers and streams during periods of rainfall. This helps to prevent flooding and improves water quality.

“I was delighted to welcome fellow Parliamentarians to Penrith and The Border to see first-hand the restoration of our precious upland peat habitat and its unique wildlife.  As the Government rolls out its new farm support scheme, which will pay farmers and landowners for the public benefits like flood mitigation that environmental improvements deliver, there is a huge opportunity for farmers and landowners in Cumbria to earn income from nature restoration.

Bringing more wildlife back to our treasured landscapes will also benefit the local economy with new jobs in conservation and tourism, protect our communities from flooding, and help to tackle climate change by capturing and storing carbon.

All of this means we’re leaving a better environment to our children and future generations.”

The Government’s 25 Year Environment Plan recognises the significant potential of the uplands to deliver environmental improvements, creating the prospect for significant investment in nature recovery efforts in Cumbria. The first tranche of the Peat Restoration Grant, announced last week, includes funding for a restoration project in Cumbria as part of the government’s target of restoring 35,000 hectares of peat by the end of this Parliament.

Rewilding just 5% of marginal land in England could create nearly 20,000 jobs in rural communities, according to analysis conducted by the group Rewilding Britain.

The RSPB site employed eight people during the breeding season in addition to the tenant farmer and his team of four workers. Visitor figures for the past year at the Stagsike access point have reached 15,000 and 3-4 times that number at Jockey Shield.

David Morris, Area Manager for the RSPB in Cumbria, said,

“Long -term sustainable management of our uplands is vital to help us mitigate the impacts of the twin nature and climate crisis. Over the last 20 years, we have made significant changes to our farming and reserve operations at RSPB Geltsdale to benefit wildlife, people and the environment. We have developed a financially viable model which sustains rural livelihoods and provides new benefits to the local economy.

Our habitat management, delivered with support from our partners, has seen restoration of rivers, peatlands and woodland creation at scale on site, helping lock up carbon, mitigate downstream flooding and provide habitats which benefit wildlife and visitors alike. It is vital that future land management schemes in places like Cumbria reward farmers and land managers for delivering a range of sustainable management like we have shown Members of Parliament at Geltsdale today.”