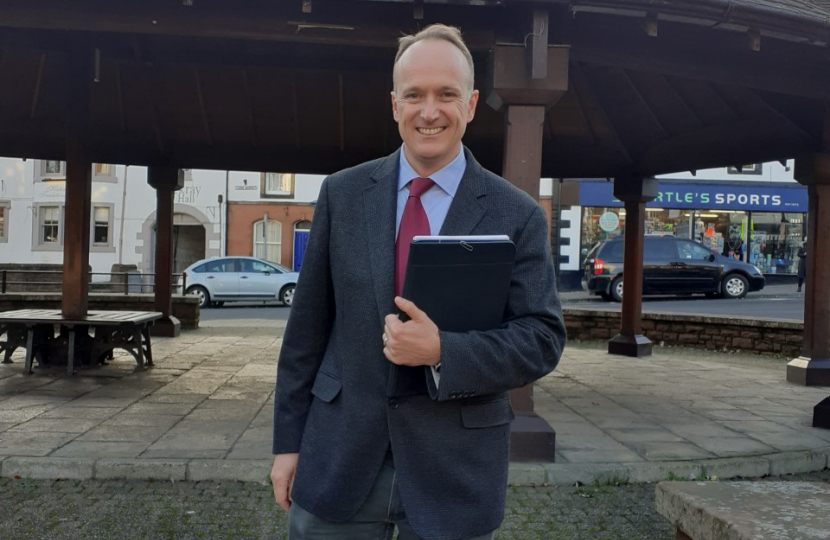 I’m sitting down to write this column after a once-in-a-lifetime event swept the nation and wasn’t it amazing? From seeing zip-wiring teddy bears in St Andrew’s Churchyard in Penrith and vintage trains in Alston to hearing again about the success of Kirkoswald’s Community Shop and marvelling at the knitted high street bollards near my home in Brampton, I have taken real pleasure in seeing communities come together across Penrith and The Border to celebrate the Jubilee weekend. Everywhere I went, towns and villages were beautifully decorated, and people were smiling, happy to celebrate not just the Queen but everything that makes our country great.

I have lived my entire life under the same monarch, Queen Elizabeth II. No other king or queen has reigned for such a monumental length of time in our nation’s history. To remain so dedicated to serving our nation and the Commonwealth through their ups and downs is a tremendous achievement; and to do so with such unwavering grace, humility and selflessness as Her Majesty has done is something truly unparalleled. Her Majesty is an immensely remarkable person who has remained steadfast through turbulent times, giving us all something to rally around and be proud of as a country. I hope you will all join me in giving thanks to an incredible public servant. God save the Queen!

Beyond the street parties and jamborees, there have been a whole host of other positive highlights within our communities recently. This month I presented the Fellrunner team with their new minibus keys so they can continue to do great work connecting our isolated communities; met with the next generation of land custodians and food producers at the Cumbria Young Farmers Clubs Field Day at Hartley Castle; and handed out some long service awards to Penrith Royal Mail staff as they showed me their shiny new fleet of fully electric vehicles now delivering across our area.

As you can probably tell, I get to meet so many interesting people in my job, but I must say a personal highlight was seeing Paddington Bear in the fur at deepest darkest Dalemain Marmalade Festival. Having read the books as a child and then to my children as they grew up, it really was special.

Further afield, I have continued to represent our communities in Parliament as your MP and as a member of the Environment, Food and Rural Affairs Select Committee. Unfortunately, I narrowly missed out on becoming the Chair of the committee but as a Newcastle United fan I know what it’s like to experience defeat now and again. I must say however that it was a really positive election and I wish the new chair, Sir Robert Goodwill, every success in the role. I will continue to bring the voices of local rural stakeholders right to the heart of Government with my work on the committee.

In particular, I’ve enjoyed some productive sessions looking into the unique problems surrounding rural mental health, triggered a new inquiry into marine mammal conservation and again quizzed environment bosses on unacceptable sewage outflows in our nation’s rivers. The work we do is so important, not just in the countryside but in urban areas too. Everyone can appreciate the need for strong food standards, clean air and protected landscapes.

While this might sound trite for an MP to say that we try our best to help people, this really hit home last month when I met with a newly re-settled Ukrainian family and their hosts in a village near Penrith. Easily one of the most emotional moments of my parliamentary career, hearing about their journey to safety was beyond moving and knowing that my team and I were able to play a part in helping them escape Putin’s awful war on Ukraine was truly humbling.

I had hoped to have a column where I didn’t need to address the Downing Street parties issue but things came to head this week. As I have said previously, I had looked to the Prime Minister to outline a timetable and process for an orderly transition to a leadership election as soon as the situation in Ukraine permitted. I believed that destabilising the UK Government at this point would undermine international efforts to support the Ukrainian people and bring the Russian invasion to an end. However, this did not happen and the Conservative Party acted according to party procedure by calling for a vote of no confidence. For the reasons I have outlined in my public statements, I expressed a vote of no confidence in Boris Johnson in that 1922 Committee vote. 41% of my parliamentary colleagues also voted in this way. I sincerely hope that the Prime Minister and the Cabinet reflect on this result closely and act accordingly. This is not about Brexit, remain or leave, or part of a campaign by the media or the Opposition. This is about honesty and integrity in politics. As a democrat, I fully respect the outcome of this vote and believe we now need to move forward to do what is best for our country.

And to end on a lighter Jubilee-related note, wasn’t the sketch with the Queen and Paddington Bear just the best thing ever on TV!?

Here you can see Neil Hudson's latest speeches and appearances in Parliament (provided by theyworkforyou):